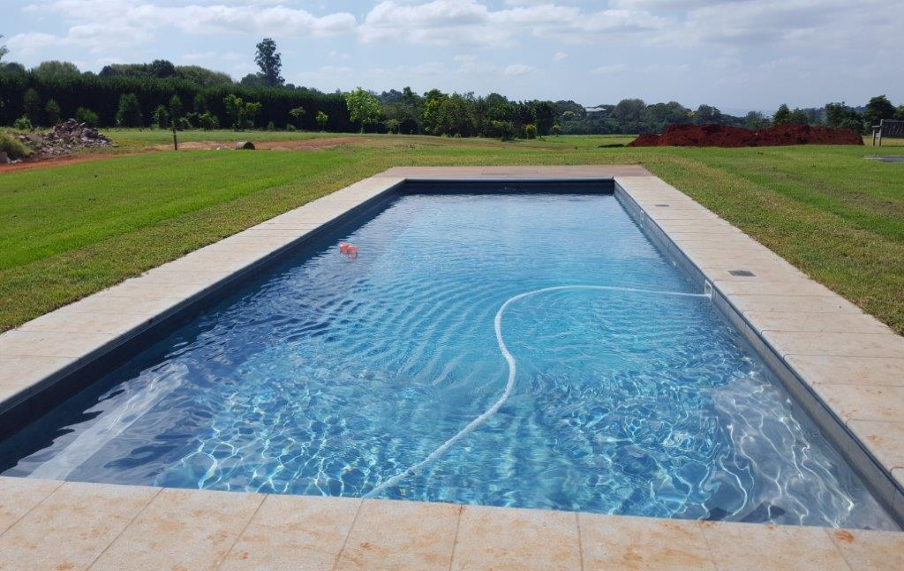 In order to understand how swimming pool water functions, it is first important to understand the basics of water in general. The following gives some information on what water is and how it behaves:

Water in its purest form is a colourless, odourless and tasteless liquid comprising: 66,50% Hydrogen, 33,25% Oxygen, and 0,25% made up of various metal and chemical ions (which become salts when mixed with water) These salts (as they relate to swimming pool water) are considered impurities in the water and are either:

organic – i.e., animal or vegetable, or

The primary source of natural water is from underground springs and wells – and the impurities it contains are gleaned largely from the different types and concentrations of salts prevalent in the soil and rock formations through which it passes on its way up to the earth’s surface. These salts can be organic – from decayed plant and animal remains that over thousands of years have penetrated deep into the soil, or inorganic – from the natural mineral content of the soil. These concentrations differ enormously from region to region – with the result that water flowing from different sources can vary significantly in terms of its salt content. The water used in our swimming pools may therefore have to be treated differently from the expected norm for no reason other than it has come from a particular source!

The secondary source of natural water is rain and snow – and this water collects its impurities from the minute dust and dirt particles that float in the air and from modern-day pollutants discharged by factory chimneys, motor vehicles, jet aircraft, etc. As a result, the air in regions near freeways, airport runways or busy harbours will usually contain far more impurities than the air surrounding remote rural villages.

Tip!! To observe just how much pollution is contained in the air, leave a motor car outside for 24 hours – then take a white cloth and wipe off the dirt that has settled on its roof!

In addition to both these sources the water flows through valleys and river beds collecting yet more impurities from:

> the soil and rocks it passes over, dust, dirt, leaves, pollen, insects and other micro-organisms blown into the water,

> the effects of animal and human usage of the water, and

Fact!! Many of the problems experienced with pool water are caused by nothing more than these modern-day pollutants – i.e., the chemical discharges from factory chimneys, motor vehicles, jet aircraft, etc and the effluent and toxic waste disgorged by industry.

Confronted with this wide range of impurities in natural water, municipal authorities cycle the water through purification plants to refine it to a consistent drinking water standard – and this usually means adding further chemicals to counteract bacteria and other harmful organisms present in the water.

The combination of all these possibilities means that although most water ‘looks‘ the same its chemical content can vary significantly – and as a result the treatment of the water in particular swimming pools may require vastly different solutions depending on the ‘actual‘ impurities in the water.

In fact, even if all pool water were to start off exactly the same it would not remain so for very long because of:

> dust, dirt, leaves, pollen and insects blown into the pool,

> the residue from various chemicals added to purify the water, and

> the construction of the pool – e.g., marble plaster surfaces will draw or release calcium into the water whereas fibreglass, paint and tiles will not.

Consequently, there can be no single solution or treatment for the water in swimming pools. Every pool is different and the water in each pool will behave differently over a period of time.

THE NEED TO SANITISE

Pool care is nothing more than good housekeeping taken into the pool area. The trouble is that when pools run on chlorine (which most do) and they are out of balance, they are not kept clean, just bleached. Pretty much the same as sweeping the dirt under the carpet, except that we are not given the choice in this case. Therefore, we cannot just look at our pools and guess what action to take, we have to test the water and sanitise on a regular basis.

We have seen that the chemical make-up of pure water comprises + 99.75% Hydrogen and Oxygen. It also has + 20 impurities making up the remaining 0,25% – and the quantity and concentration of these impurities increases as the water flows from its source to our swimming pools.

If we wish to treat our pool water we need to know more about the impurities it contains – but the problem is how (on a domestic level) can these impurities be separated and measured? And even if they could, how can effective treatments be prescribed for literally millions of possible combinations?

e.g., several pools may each have exactly the same water content except that:

_ in one pool – the Sulphate level is doubled,

_ in another – the Sulphate level is doubled and the Chloride level is tripled,

_ in a third – the Sulphate level is tripled but the Chloride level is halved,

_ in a fourth – there are no Sulphates nor any Chlorides, but the Nitrate level is quadrupled,

Fortunately, the general behaviour of pool water (including its impurities) is affected by only five overall factors.

The three main factors are:

> its Total Alkalinity (TA) – measured in parts per million (ppm), Where the ideal level is between 80 and 120 ppm,

The two minor factors are:

> its Total Dissolved Solids (TDS) – measured in parts per million (ppm), where the ideal level is between 500 and 800 ppm, and

> its temperature – measured in degrees, where the ideal level is between 18} and 25} Celsius.

The three main factors (i.e., the TA, the pH and the CH) together constitute what is known as The Water Balance.

Flexibility!! So long as the three main factors are maintained in an overall balance with each other then the actual content and quantity of the impurities is reduced to a relatively minor role. But if the three main factors move out of balance with each other – then relatively small changes in the quantity or nature of the impurities can create disproportionately large variations in the condition of the pool water.

The two minor factors (i.e., the TDS and the temperature) do not generally affect the water balance unless they reach extreme values.

The disinfectant used to sanitise the pool water will affect the water balance to the extent that its pH differs from the actual pH of the water – e.g., HTH has a pH of 9,5, Peroxide 5,0 and TCIA tablets 3,5.

The concept of water balance is rather like that of a circus juggler trying to keep three balls up in the air at the same time.

He can throw the balls straight up in the air or slightly to one side, he can throw them higher or lower – and he can even walk around while he juggles! It really doesn’t matter! As long as he keeps all three balls going up and around in roughly the same plane relative to each other everything will be fine – but if he allows one ball to drift too far off course his entire act will collapse! What the juggler is in fact doing is keeping the balls within a ‘flexible envelope’ of space.

It is exactly the same with pool water. As long as the three factors (the TA, the pH and the CH) are kept in the same relationship relative to each other (and of course within certain overall limits) all will be fine – but let even one factor move outside this ‘envelope‘ and the pool water will move out of balance. The water will lose its sparkle, start to look cloudy, develop a light green tinge . . . and then go completely green!

What types of swimming pools do you get?